Hidden deep within the ascetic pages of Joseph Dalton Hooker’s Handbook of the New Zealand Flora (1864-1867) is a dispassionate characterization of a singular plant:

The circumstances of Meryta sinclairii‘s European discovery are somewhat opaque. All we have to go on from Hooker’s account are an imprecise location – somewhere along an eighty-plus-mile stretch of coastline between Cape Brett (Rakaumangamanga) and Cape Rodney (Okakari) – and the identity of the plant’s Pākehā (European) collectors: Andrew Sinclair (1794-1861) and William Colenso (1811-1899). Arguably the most standout feature of this otherwise unremarkable description is Hooker’s admission that he based his characterization of the fruits on a “very imperfect” specimen, and in fact had not seen the flowers at all. 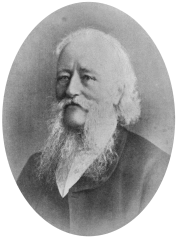 Two years later, an Auckland botanist named Thomas Kirk (1828-1898) delivered a paper that placed this discovery in a more conspicuous light. Colenso, Kirk points out, first caught sight of the plant at Whangaruru Bay – a site toward the northern end of the range stipulated by Hooker [1]. Indeed, a glance through Colenso’s letters to Kew Gardens reveals that he first apprised William Jackson Hooker (Joseph’s father) of M. sinclairii in 1841, when he sent only a “single leaf!” without flowers or fruit. Colenso’s Ngāti Wai acquaintances had informed him, however, that although the plant was virtually nonexistent on the mainland, it was “common on the Islets of W[h]angarei Bay, (where they say both leaves & plants are much larger.)” They also provided him the plant’s native name: puka.[2]

Kirk’s account continues: Not long after glimpsing M. sinclairii himself, Colenso passed this information along to Sinclair, who visited the area and found only a single plant “protected by a fence, and tabued [sic] by the natives, by whom it was stated to have been brought from the Poor Knights’ Islands, and who were greatly astonished at Mr. Colenso’s frequent visits to the locality, during several successive years, in the vain hope of procuring flowers and fruit.” Kirk here refers to the Māori principle of tapu, a binding restriction or sacred prohibition enforceable  through the threat of property loss or even – in more serious cases – death.[3] Sinclair, it seems, paid these constraints little heed. He wound up informing a collector and magistrate named William Mair, who eventually laid hands on specimens of the plant’s fruit and gave these to Sinclair, who conveyed them to Kew. Returning to the area some time thereafter, Sinclair discovered that the tree had been cut down.[4] A number of years later, Kirk attributed this move to Ngāti Wai, who undertook to enforce the tapu in response to the theft of the fruit.[5] It bears noting that Sinclair’s own life was also cut short a few years later, when he drowned in crossing the Rangitata river in Canterbury.

The episode fired Kirk’s interest sufficient to inspire a trip to Taranga Island – considerably to the southward – in search of this elusive and controversial plant, where he delightedly found “a few trees in various stages of inflorescence and fruit.” Such a discovery afforded the opportunity for a finer-grained and more authoritative description – though the voucher specimens themselves did not survive, “owing to their having been spoiled by sea-water, from exposure in an open boat during a severe gale on our return.” Kirk’s findings also seeded further investigations on the mainland. Making inquiries at Ohora, Kirk learned that Māori horticulturalists had “planted a young tree on one of the Fanal Islands, which is still living although it has grown but little.”[6]

These extraordinary planting efforts – on islands flanking a lengthy portion of the Northland east coast – beg the question: What was the Ngāti Wai interest in puka? Kirk noted that “[t]he resin which exudes whenever any part of the plant is wounded or bruised in all probability possesses medicinal properties, but it has not been subjected to analysis.” Instead, he considered M. sinclairii to be “of great value as an ornamental tree.”[7] The plant’s importance may, in fact, have been medicinal: M. sinclairii shares a taxonomical family, Araliaceae, with Panax schensing and Panax quinquefolium (native to East Asia and North America respectively), both of which are used widely as digestive aids, general therapeutics and aphrodisiacs.[8] There have been suggestions puka was used to induce miscarriage as well. “From the mystery attached to this [pukanui] and from remarks made,” Whangarei Museum curator Katie Pickmere wrote in 1940, using a synonym for puka, “I gathered that it was used to produce abortion, as was the decoction from Tataramoa and Harakeke.” Abortion was and remains a highly politicized subject in Aotearoa New Zealand. New Zealand colonial law criminalized abortions wholesale at the time of Colenso’s repeated visits to the puka tree, which presents another possible explanation for the apparent secrecy surrounding the plant: Colenso, a proselytizing exponent of the Church Missionary Society, may have had difficulty gleaning this kind of information, or, if not, would likely have been unwilling to share it widely. Legislatively speaking, little had changed by the time of Pickmere’s remarks in 1940, and the procedure remains illegal – excepting situations of incest, fetal impairment, or a risk to the mother’s health. This is fertile ground for continuing medicinal secrecy or, alternatively, gratuitous speculation. Londa Schiebinger has described how eighteenth-century imperial cultures worked to suppress knowledge of West Indies abortifacients in Europe, in a process she calls “agnotology”: the making of ignorance. Intriguingly, the plant at the center of Schiebinger’s analysis – known as the peacock flower, or Caesalpinia pulcherrima – would also come to be valued in Europe for its ornamental, rather than abortifacient, qualities.[9] The occupying New Zealand government has fabricated legal circumstances similarly conducive to such transfigurations. The current state of affairs makes it hazardous to guess  from a distance one way or another.

Whether or not puka represents a case study in juridically constituted ignorance, it does illustrate how indigenous botanical knowledges and practices have been strategically marginalized within colonial and imperial representations. Hooker’s account of Meryta Sinclairii is inconceivable without Ngāti Wai plant transportation and acclimatization efforts, as well as their initial willingness to communicate regarding the plant’s geographical distribution. Yet the description in the Handbook conveys none of this information, not even the plant’s Māori name. If, on the other hand, you look up puka in the Handbook‘s vernacular-Latin index, this leads to a second index giving only the plant’s Latin binomial, together with the page number on which it’s described. The endpoint for this process is an English-language description with no hint whatsoever that tangata whenua had ever played a role in knowing or making known the plant. If you began with this knowledge, the Handbook actively encouraged you to supplant it with its own authoritative determination, even as settlers were usurping the Māori presence on the land. Such a text did more than simply reflect the circumstances of its production; it actively shaped them.

In the case of puka, it is only from lopsided European interest, and by extension from extraordinary Māori concern for the plant, that we know about this anecdote at all. This represents only one of perhaps innumerable analogous – albeit unrecorded – instances of crucial botanical information acquired via indigenous experts, and later presented as purely European matters of fact. For reasons as ideological as they were informational, the Handbook was sparse on such details. Yet it was Hooker who, perhaps more than any other Victorian individual, helped define the genre according to which plants and their cultures of origin and collection would be disseminated. Untangling the knotted, transcultural circuits through which nineteenth-century botany was produced entails reading through these race-based inclusions and exclusions, even as it throws into sharp relief the colonial frameworks that continue to shape contemporary understandings of indigenous knowledge and its transformations.